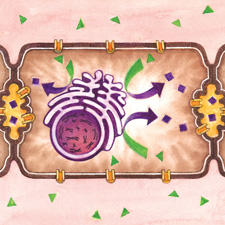 Metabolism is the enzymatic modification of drugs and other xenobiotics, usually to increase clearance. It is a determinant of oral bioavailability, clearance, and half-life in vivo. Metabolism occurs predominantly in the liver and may also occur in the intestine or other organs.

Evaluation of an NME’s drug-drug interaction potential is an integral part of drug development and regulatory review prior to market approval. Many metabolic routes of elimination, including most of those occurring through the cytochrome P450 family of enzymes, can be inhibited or induced by concomitant drug treatment. An NME must be characterized both in terms of the enzymatic pathway(s) by which it is metabolized and in terms of the effects it may have on the metabolism of other drugs. If positive, the latter is an example of a pharmacokinetic drug-drug interaction.

Observed changes arising from metabolic drug-drug interactions can be substantial — an order of magnitude or more decrease or increase in the blood or tissue concentrations of a drug or metabolite — and can include increased formation of toxic and/or active metabolites or elevated exposure to a toxic parent compound such that toxic levels are achieved. For this reason, in vitro metabolic assessment plays a key role in early drug discovery with ExpressPlus™ screening assays as well as in advanced stages of development.