Transporters In Drug Development Based On Recent ITC Recommendations

Transporters are membrane proteins highly expressed in various organs of humans. They play a pivotal role in the absorption and disposition of both endogenous and exogenous molecules. In the last decade, a lot of focused research has been conducted to understand potential clinical drug-drug interactions mediated by transporters. Regulatory agencies (including the US FDA and EMA) made mandatory the assessment of new drugs as substrates and inhibitors of drug transporters. Recently, the International Transporter Consortium (ITC) updated their recommendations through a series of white papers based on the latest research. This article discusses the importance of emerging transporters of clinical relevance.

Transporters of Clinical Relevance: The updated recommendations of the ITC for transporter screening by organ, considering drug-drug interaction potential, liver toxicity, drug-induced vitamin deficiency, and disposition of biomarkers, are presented below. 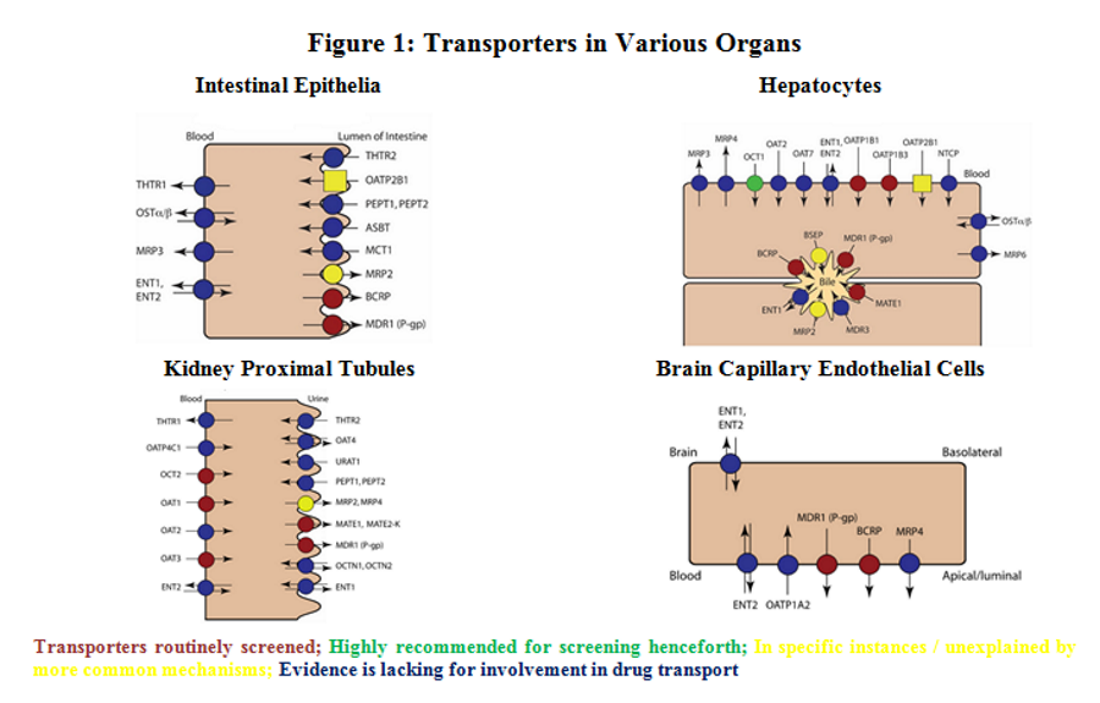 OCT1 is responsible for the hepatic uptake of metformin and its subsequent pharmacological effect.  Therefore, inhibition of OCT1 can greatly impact metformin pharmacodynamics (but not its pharmacokinetics, since it is eliminated almost exclusively by the kidney). Based on clinical evidence, evaluation of substrate and inhibition potential for OCT1 is suggested during drug development as per the decision trees shown below. 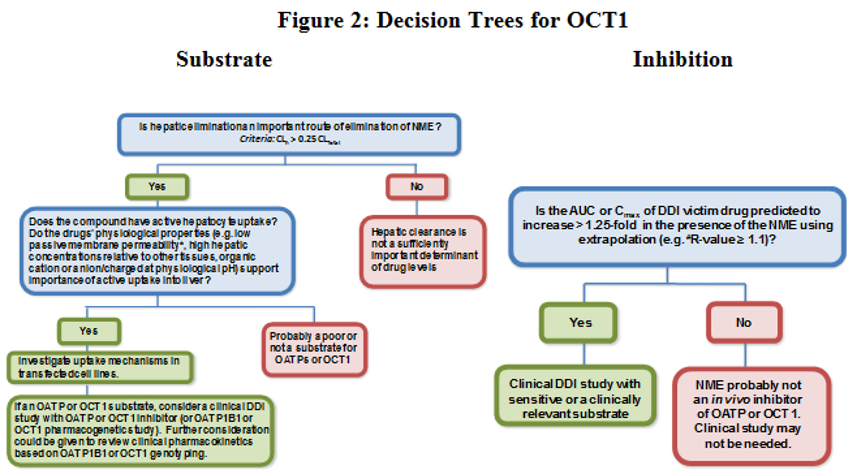 OATP2B1 has low- and high-affinity binding sites and is expressed in the intestine and liver. Notable clinical substrates of OATP2B1 are atorvastatin and rosuvastatin. OATP2B1 shows pH-dependent transport. Hence, in addition to screening at pH 7.4, it is also recommended to screen substrates at pH 5.5.

OAT2 is expressed in the liver and kidney. Recent studies have shown that OAT2 is responsible for uptake of creatinine (a renal function biomarker) into the renal proximal tubule. As there is no selective inhibitor of OAT2 in vivo, it is difficult to clearly establish the role of OAT2 in creatinine disposition.

Thiamine Transporters (THTR) 1 and 2 are responsible for uptake and distribution of thiamine (vitamin B1) and are expressed in the intestine, blood-brain barrier, and kidney proximal tubule. THTRs interact with drugs like metformin, trimethoprim, and fedratinib. Inhibition of THTR2 has a significant impact on thiamine intestinal absorption and renal reabsorption, resulting in thiamine deficiency. Many reported cases of drug-induced thiamine deficiency, which ultimately caused Wernicke’s encephalopathy, were due to inhibition of the thiamine disposition pathway.

Hepatic bile acid transporters (BSEP, NTCP, MRP2, MRP3, MRP4, & OST α/β) contribute to the disposition of bile acids, and drug interactions involving these transporters may cause cholestasis and liver injury. Hepatic bile acid levels are regulated through FXR-SHP and FXR-FGF19 pathways, which control multiple adaptive mechanisms for bile acid detoxification.  Another transporter, ASBT, is responsible for reabsorption of bile acids from the intestine and its inhibition is not involved in cholestasis.

In addition to the transporters (P-gp, BCRP, OAT1, OAT3, OCT2, MATE1, MATE2-K, OATP1B1, and OATP1B3) recommended by regulatory agencies for screening, the following transporters may also be considered: OCT1 & OATP2B1.