The majority of the population is seropositive for many our most widely used viral vectors for gene therapy.  The ability to screen for neutralizing antibodies in patient sera is therefore needed prior to therapy. Exposure to a virus usually leads to the development of antibodies to portions of that virus by the person’s immune system.  While we utilize this response to develop vaccines, it can be an impediment when viruses are instead needed to deliver a much needed genetic cargo.  One of the more widely used viral vectors for gene therapy is adeno-associated virus (AAV), and some estimates are that nearly ninety percent of the population has been exposed to this virus.  Many of those who have been exposed have also developed antibodies against this virus.  If AAV is injected into these individuals so that it can introduce new genes into the patients cells then these antibodies may coat and prevent the virus from entering the target cells.  This neutralizing effect of the antibodies would thus negate the effect of the genetic treatment.  To prevent this scenario, patients can be screened in advance to see if they have levels of antibodies that are high enough to neutralize the virus.  Those with either no antibody or low levels of antibody can then be cleared for treatment.

Gene therapy using adeno-associated viral (AAV) vectors has been shown very promising in treating some diseases, such as genetic disorders. However, individuals with pre-existing immunity to AAV may be less likely to benefit from such therapies.  The purpose of this study was to develop a cell-based assay to determine the presence of neutralizing antibodies (NAb) against AAV2 in human sera. 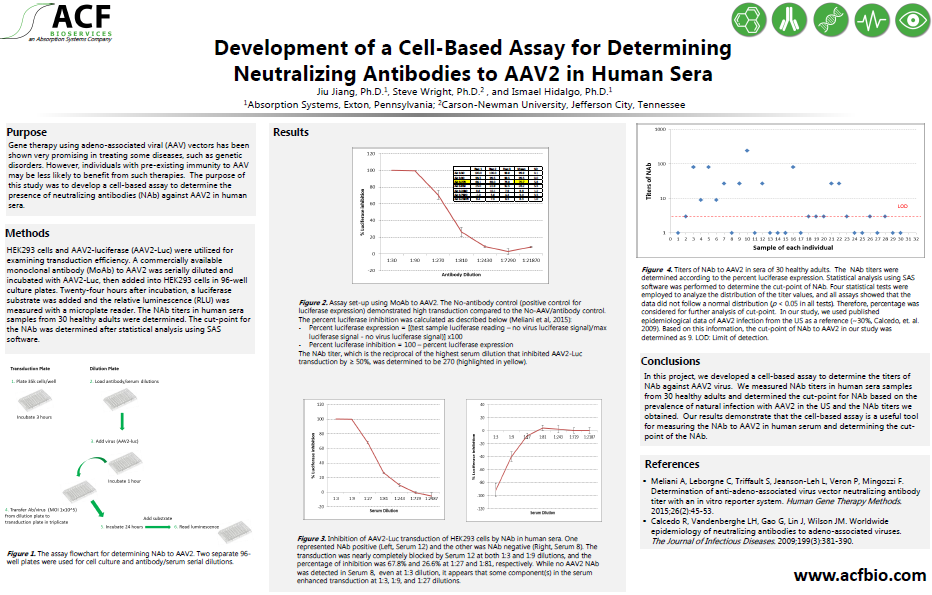